1. What sets the state’s cosmopolitan cities—Pittsburgh and Philadelphia—apart from each other?

Philadelphia and Pittsburgh have quite a lot in common, including diverse populations, ample cultural attractions, and rabid sports fans. But Philadelphia is much larger and denser. Its population of 1.5 million is five times that of Pittsburgh. So, as you can imagine, it’s faster paced, its streets and sidewalks are more prone to gridlock, and it has more dining and nightlife options. It draws comparisons to Boston and even New York, whereas Pittsburgh seems worlds away from those metropolises. As a visitor, you’ll want a car and GPS in Pittsburgh, with its winding streets, steep hills, and countless bridges. You’re best off without a car in the heart of Philadelphia, where you’ll find a sensible street grid and extensive public transportation network.

2. Before visiting Amish country, what are some key things travelers should be aware of?

The most common faux pas is snapping photos of Amish people. It’s awfully tempting to whip out your camera when you see a horse and buggy, men plowing their fields, children cruising by in a pony cart, or women hanging laundry, but it’s also disrespectful. Many Amish see photographs as a violation of the biblical commandment that forbids “graven images.” They’re all about humility, and they believe photographs can breed pride and vanity. Even if you don’t agree, put yourself in their shoes. How would you like it if strangers took pictures of you as you went about your day? Some tourists in Amish country act like they’re on safari!

If you want to know why the Amish live the way they do, head to the Amish Experience at Plain & Fancy Farm, the Amish Farm and House, or the Mennonite Information Center in Lancaster County. All three offer a variety of ways to acquaint yourself with this fascinating subculture, including driving tours of Amish country.

Pennsylvania is packed with historical sites, and the amazing thing is that quite a few commemorate events of national or world significance. Take Independence National Historical Park in Philadelphia. It’s home to Independence Hall, where the nation’s Founding Fathers debated and drafted the Declaration of Independence and later the Constitution. Next door is Congress Hall, which served as the nation’s capitol for 10 years. The famous Liberty Bell is just across the street. It’s no wonder this area is known as “America’s most historic square mile.”

You can’t talk about Pennsylvania’s must-see historical attractions without mentioning Gettysburg National Military Park, site of the Civil War’s bloodiest battle and, supposedly, one of the most haunted places in the country. There’s something incredibly moving about walking in the footsteps of so many fallen soldiers.

My third pick commemorates a more recent tragedy: the 9/11 terrorist attacks. The Flight 93 National Memorial near Shanksville marks the spot where United Airlines Flight 93 crashed on that nightmarish day. It honors the passengers and crew who perished while trying to wrest back control of the hijacked plane. The memorial is a work in progress, but no amount of construction can diminish its emotional impact.

4. What Pennsylvania-centric eats are worth trying?

The state’s two biggest cities take great pride in their signature sandwiches. Philadelphia’s is the cheesesteak, a long, chewy roll stuffed with thin slices of steak and melted cheese. If you ask a bunch of Philadelphians where to get the best cheesesteak, you’ll get a bunch of answers. It’s an endless debate. Ask a bunch of Pittsburghers where to sample the city’s signature sandwich, and they’ll all give you the same answer: Primanti Bros. What makes a Primanti’s sandwich unique is the inclusion of French fries and coleslaw – not on the side but inside the sandwich – along with your choice of meat. Founded in the 1930s, Primanti Bros. now has more than 15 locations in the Pittsburgh area, so you’re never far from artery-clogging goodness.

If you’re visiting Lancaster County or another part of the state with a large Pennsylvania Dutch population, be sure to sample PA Dutch-style foods like schnitz un knepp, chow-chow, shoofly pie, and whoopie pies – if only because they’re fun to say! Kitchen Kettle Village in the Lancaster County town of Intercourse (hee hee) is a great place to do your sampling. If you’re anywhere near Kennett Square, the Brandywine Valley burg known as the Mushroom Capital of the World, order a bowl of mushroom soup. And if you find yourself in Erie, treat yourself to an orange-vanilla cone at Sara’s or some sponge candy at Romolo Chocolates.

5. What are your go-to kid-pleasing spots?

One word: Hershey. You’ve got to love a town whose history is steeped in chocolate. The Hershey Company still makes chocolate there, but these days the town is mainly in the business of family entertainment. It has a great amusement park, Hersheypark, and adjoining zoo. Kids can try their hand at chocolate-making at a new museum called The Hershey Story. The Butterfly House at Hershey Gardens and the chocolate milkshakes at Hershey’s Chocolate World are huge hits with kids and grownups alike.

6. What part of the state do you enjoy the most?

I love the Laurel Highlands region, which is close to my hometown of Pittsburgh. It satisfies my seemingly contradictory cravings for rugged adventure and creature comforts. I can spend the day whitewater rafting in Ohiopyle State Park, hiking the 70-mile Laurel Highlands Hiking Trail, or biking the Great Allegheny Passage and, in the evening, treat myself to a hot stone massage or nine-course chef’s tasting menu at Nemacolin Woodlands Resort. The Laurel Highlands are also home to one of the world’s most celebrated works of architecture: Frank Lloyd Wright’s Fallingwater. I’ve been there in winter and fall, and I’m dying to visit in spring, when the waterfall upon which the house is built is at its fiercest.

This is a hard one because Pennsylvania has so many “small town Americas.” Two that spring to mind are New Hope and Bellefonte. New Hope sits on the Delaware River about an hour north of Philadelphia. It’s packed with boutiques, antique shops, art galleries, and restaurants. Unlike a lot of small towns, it has plenty of nightlife and a thriving gay scene. Lambertville, New Jersey, its across-the-river neighbor, is also a gem. So you get two darling towns for the price of one. Bellefonte is in Central Pennsylvania, not far from State College, and bills itself as the region’s “Victorian Secret.” If you love Victorian architecture, you’re going to love this place. In December the town puts on a very Victorian Christmas celebration, complete with candlelit caroling, high teas, and appearances by Charles Dickens (or someone who looks a lot like him). Bellefonte has also been named the best fly-fishing town in the state, so it attracts a good number of anglers.

My vote goes to Pine Creek Gorge, better known as the Grand Canyon of Pennsylvania. Get a bird’s eye view from the overlooks in Leonard Harrison State Park, and then get to the bottom of it – literally. Pack a six-pack and some sunscreen and paddle the creek, or pedal the Pine Creek Rail Trail, which runs along the water. Pine Creek Outfitters can hook you up with a raft, canoe, kayak, or bicycle. I’m not ashamed to say that I took the lazy route, hitting the trail in a covered wagon courtesy of Mountain Trail Horse Center. Pine Creek Gorge is especially magical in autumn, when it’s ablaze in color.

9. What’s one thing you would like visitors to know about the Keystone State?

There’s always something new to see or do. I can’t tell you the number of attractions that opened or were in the works as I was writing Moon Pennsylvania. If you haven’t been to Philadelphia or Gettysburg since grade school, you’ve got a lot to see. If you associate Pittsburgh with steel mills and soot or the Poconos with cheesy couples resorts, you’re in for a huge surprise. Pennsylvania may be known for historical richness, but it definitely changes with the times. 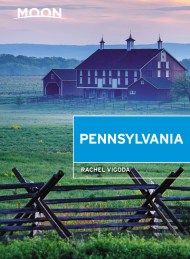