1. What draws people to move to Costa Rica?

The physical beauty of Costa Rica is often the initial draw. It’s hard to resist the beaches on both coasts, the rainforests, and the mountain towns that look like something out of a tropical Switzerland. Later, visitors start getting to know the Ticos and learning about the country—how it doesn’t have an army and is a model for green development the world over. When people find out it’s one of the most economically and politically stable countries in Latin America, they’re hooked.

2. It sounds like there’s a real sense of community amongst expats. Is it as easy to feel like you’re a part of the local community?

Expats stand out so they also tend to stick together. In the Central Valley there’s a large enough expat community to support English-language community theater and social clubs. In small towns the expat communities are smaller, but they are often quite active—by starting schools for their kids or libraries for the community.

3. Can you provide a few suggestions for finding employment in Costa Rica?

It’s easier to start your own business in Costa Rica than to find a good job. Expats successfully run bookstores, hotels, restaurants, car rental agencies, adventure tour companies and many other businesses. If you don’t want to go that route you could teach English or do some sort of U.S.-based work—like editing or web design—that doesn’t rely on you being in the office.

4. Where did you spend the most time when you first arrived? Where do you go now that you know the country better?

I’m a city girl at heart so I at first spent a lot of time in the Central Valley near the capitol city San Jose. It’s a city people love to hate but I found a lot to like there. I’m also not a fan of really hot weather, so the temperate climate suited me fine. As I got to know the country better, I traveled all the back roads and started having a real appreciation for the inland valleys south of San Jose.

5. What do you love most about Costa Rica?

The quality of the air (it just feels green!) and the different cultural priorities. People here still value human connection over economic success. A while back someone asked me if I felt more at home in Costa Rica or the U.S. I told him that I feel more at home in the U.S., but I feel better in Costa Rica.

6. Where do you go for a weekend getaway?

The lush and temperate area around Lake Arenal, though not a secret spot by any means, draws me again and again. And though I don’t want to live at the beach I like to visit—especially places on the Nicoya Peninsula like Nosara, Samara, or Mal Pais.

7. What do you consider essential items to pack before moving to Costa Rica? Are there any things you just can’t find?

If there is gear you need to do your job or practice your hobby—like stained-glass equipment, for instance, or special computer equipment—I’d bring that down with you. I also found it difficult to find good camping and hiking gear. Most other things you’ll be able to find here.

8. How much money would you suggest someone set aside before moving? What are the initial costs?

That’s a difficult question to answer, because everyone has such a different idea of what is essential and how they want to live down here. On the economical end of the spectrum (which is where I find myself), I would suggest having at least $5000 to tide you over while you look for work or start a business, and figure out where you want to live. If you have more, it’ll be easier, of course, and you won’t be under such pressure to make a living.

9. What is the one thing you wished you would have known about living abroad before you made the move?

I’d lived abroad before I came to Costa Rica, so I sort of knew the drill. I moved here by myself, after a relationship had imploded, so I was lonely at first. But I expected that, and the new environment was so stimulating that I found myself recovering emotionally sooner than I’d expected.

10. What would people be surprised to know about Costa Rica?

Costa Rica has a female president and high female participation in its national assembly. I think people sometimes think “third world” nations in Latin America are machista and that women don’t participate fully in politics. The truth is that Costa Rica does a lot better on that account than the U.S. 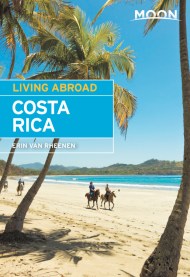 From visas, to job-hunting, to cultural assimilation, get a head start on your life-changing move.