The first high-profile film made in Savannah was 1962’s Cape Fear, starring Gregory Peck and Robert Mitchum (who was arrested and briefly jailed years before for public indecency while wandering in a drunken state through Savannah). But 1975’s Gator, directed by and starring Burt Reynolds, really put the city on the Hollywood map, due in no small part to the then-mega star power of Reynolds himself, whose filmmaking mission was, in his words, to “say some nice things about the South.”

In short order, parts of the landmark 1970s TV miniseries Roots were filmed in and around Savannah, as were part of the follow-up Roots: The Next Generation.

Film aficionados fondly remember the 1980 TV movie The Ordeal of Dr. Mudd, starring Dennis Weaver. In addition to the infamous story from “The Book” where Jim Williams unfurls a swastika banner to ruin a shot on Monterey Square, there are other reasons to remember the film. Dr. Mudd also expertly uses interiors of Fort Pulaski to tell this largely sympathetic account of the physician accused of aiding Abraham Lincoln’s assassin John Wilkes Booth. In a chilling bit of synchronicity, Booth’s brother Edwin, the most famous actor in the United States during the 1800s, played in Savannah often.

A key chapter in local filmography came with the filming of 1989’s Glory. River Street was the set for parade scenes, and as Colonel Shaw, Matthew Broderick delivered his address to the troops a block west of Mrs. Wilkes’ Boarding House. The railroad roundhouse off MLK Jr. Boulevard stood in for a Massachusetts training ground.

Another brush with Hollywood came with the filming of 1994’s Forrest Gump in and around Savannah. Look for Tom Hanks on a bench in Chippewa Square—and note how the traffic runs the wrong direction around the square! The bench itself now resides in the Savannah History Museum on MLK Jr. Boulevard. The steeple in the shotc of the floating white feather is of nearby Independent Presbyterian Church.

Ben Affleck and Sandra Bullock filmed many scenes of 1999’s Forces of Nature on Tybee Island and in Savannah (yours truly’s house is in the final scene for about two seconds). Longtime Hollywood producer and Savannah native Stratton Leopold, who also owns Leopold’s Ice Cream on Broughton Street, helped Savannah land 1999’s The General’s Daughter starring John Travolta (look for the grand exterior of the main building at Oatland Island). Trotting out a serviceable Southern accent for a Brit, Kenneth Branagh came to town to play a disgruntled Savannah lawyer in Robert Altman’s Gingerbread Man.

Though quite a few downtown art students had no idea what the fuss was about, Robert Redford still turned female heads when he came to town to direct 2000’s The Legend of Bagger Vance, with Will Smith as the eponymous caddie. In the film, watch for the facsimile of a Depression-era storefront specially built around City Market. Redford returned to Savannah in late 2009 to film The Conspirator, another locally shot film about the Lincoln assassination. (Savannah stands in for Washington DC.) Cate Blanchett and Katie Holmes starred in 2000’s The Gift, one of the few movies to take full advantage of the beauty of Bonaventure Cemetery.

Ironically, considering the impact of “The Book” on Savannah, Clint Eastwood’s Midnight in the Garden of Good and Evil (1997) is arguably the worst movie ever filmed here. Eastwood’s famously laissez-faire attitude toward filmmaking—reportedly there were no rehearsals before cameras rolled—did not work well, perhaps because Savannah’s already a pretty darn laissez-faire kind of place to begin with.

But the biggest stir of them all came in summer 2009, when Disney star Miley Cyrus of Hannah Montana fame came to Tybee Island to film The Last Song. 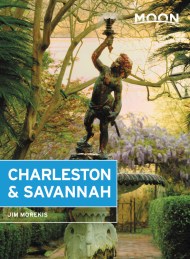 Whether you’re relaxing on a romantic beach, soaking up the rich history, or reveling in the Southern hospitality, dig into these fun-loving sister cities with Moon Travel Guides.