If you were packing up to move to Northern Europe and didn’t speak any of the local languages, you shouldn’t be too worried. There aren’t too many foreigners who can speak Swedish, Norwegian, Danish, or Dutch quite as well as those people speak English. The Germans are also known to be good English-speakers, and even the French understand you better than they might have you know.

The Italians, on the other hand, are often taken to task by their European peers for their lack of language skills, especially when, at European Union meetings, the steady chain of fluent English breaks down when the Italian delegate steps up to the podium.

It’s not that English is rarely heard in Italy—between the millions of tourists that come each year and the English jargon that has sneaked into the workplace, Italians are regularly bombarded with foreign words. Businesspeople are swimming in them. On an average day, un top manager will be expected to controllare l’email, scrollare, unzippare and perhaps even scannerizzare just to send something to il suo staff to get il loro input. Then it’s up to another department to processare i raw data before anyone can actually get to la fase dell’ implementation. It’s all so confusing to a nonnative speaker that financial dailies have started distributing pocket-sized glossaries with the latest terms.

Anyone who works in this kind of environment, or in tourism, or else has traveled a lot (loads of young Italians have spent extended periods of time in London, and many in the United States) has a good command of English. But others know just enough to get by. Why would they spend time perfecting it, they’d argue, if they’re hardly going to use it? This brings up the more pertinent question: Why don’t North Americans just learn to speak Italian?

Lots of North Americans who come to Italy on a one-way ticket do, and get on with their Italian lives right away. Others tend to embed themselves in a circle of fellow foreigners instead. It’s only natural for immigrants to any country to band together to make the adjustment easier, but if you stay trapped in this cocoon for a while, you should ask yourself why you decided to move to Italy.

There’s so much to gain by speaking the language well, and so much to lose if you don’t. Every newscast you don’t understand, every joke that goes over your head, and every other disappointment in life that results from poor communication will be patent reminders of how much you’re missing.

After you’ve lived in Italy for a few years, you’ll start to forget that you’re speaking a different language altogether. Walking into a fruit-and-vegetable store, you won’t pause at the door to remember how to say the word “basil.” Your vocabulary will expand by the day. You’ll start dreaming in Italian and maybe counting in Italian numbers by instinct (even though an Italian friend of mine living in London insists that this is never the case). You and your expat friends in Italy may even stop speaking to one another in English, and at some point, you’ll feel as if you’ve lost your English altogether when the word basilico becomes firmly attached to that bundle of aromatic greens sitting next to the peperoncino. You know, next to the what’s-it-called, the red stuff you add to a sauce to make it spicy.

Everyone plumps their own theory on the quickest and most efficient way to learn a foreign language. The throw-the-little-boy-into-the-pool-and-he’ll-learn-to-swim approach may not be the best for every student, nor for every language, but it seems to work pretty well in Italy. For one thing, Italian is a relatively easy language to conquer, especially for those who speak a little French, Spanish, or any other Romance language. The grammar and lexicon are the same, and phonetically, Italian is about the easiest language there is. Every word is pronounced exactly as it is spelled. (English can be a nightmare in that regard. Just look at the word “nightmare.”) On top of that, Italians are very patient with foreigners struggling with their native tongue. They’re quite used to outsiders butchering Dante’s language on a regular basis. For that matter, they’re quite used to miscommunicating with other Italians.

If you don’t speak any Italian and learning a new language is daunting for you, here’s a hint: Watch as many Italian films as you can. It will help. Films clearly won’t teach beginners the fundamentals, but they will give you a feel for the language. For those who studied Italian years ago but haven’t spoken it in a while, watching movies is an excellent way to get back into practice. Fortunately, most of the Italian films available in the United States have English subtitles. In Italy, foreign films are almost always dubbed. In fact, the profession of dubbing movies here is something of a revered art in itself.

Italian courses are easy to find in the United States. Just about every local college offers a class at night or on the weekends, and any independent language institute will certainly feature it on its brochure. Learning the basics before you come is a smart idea. Mastering the grammar should only take a few months, and then you’ll be free to improve your pronunciation and build your vocabulary by the time you arrive in Italy, rather than poring through lists of irregular verbs—something that could just as easily be done at home.

If you’re a college student and are considering a move to Italy after graduation, obviously the wisest option is to take a semester abroad in Italy. You may end up speaking a lot of English with your cohorts, but at least you’ll be surrounded by Italian-speakers for a few consecutive months.

Italy remains the second most popular destinations for U.S. students abroad, after the United Kingdom (13 percent of all students abroad go to Italy, versus 15 percent in Britain.) It’s amazing how many of them fall in love with Florence or Rome on their junior year abroad and then decide to move back for good. That field is destined to grow as more students keep flowing in. In 1985, U.S. undergraduates studying in Italy numbered around 4,000. By 2010, there were about 32,000 of them at some 400 U.S. programs or in a curriculum of their own design.

Two popular self-styled options are the universities for foreigners in Siena (www.unistrasi.it) and Perugia (www.unistrapg.it). Both offer three-month beginner courses in Italian, as well as more advanced programs. Both cost in the vicinity of €1,500. There are dozens of other institutes spread throughout Italy. Two examples are the Dante Alighieri Society (www.dantealighieri.com) in Siena, and Lingua Due (linguadue.com) in Milan. Both offer two-, three-, and four-week courses for about €150–200 per week.

A number of private U.S. companies also offer language courses in Italy. One of the more reputable is Education First (www.ef.com), based in Boston. It conducts both a year-abroad program and shorter-term classes at its school in Rome. 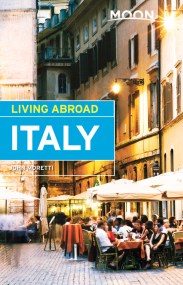 From visas, to job-hunting, to cultural assimilation, get a head start on your life-changing move with Moon Travel Guides.