Over the past two centuries, Tucson has grown from an adobe-hut village on the far edge of the Spanish frontier into a major Sunbelt city, and yet through all that time and change the Old Pueblo has held on to the disparate cultural ingredients that have made it one of North America’s most unique destinations.

In Tucson, visitors will find the true Southwestern experience, one that is neither encased under glass nor petrified through architectural uniformity; the Southwestern lifestyle is lived, not merely marketed. And what is this lifestyle? It involves a dedication to cultural mixing and a concentration on an active life lived outdoors on the saguaro-lined trails of the desert. This lifestyle is casual and laidback, with flip-flops and shorts sufficing for dinner-wear, and a friendly margarita-and-sunshine-inspired smile sufficing for a general greeting.

If you’re looking for extreme pampering, holistic poolside navel-gazing, brisk hikes into the cactus foothills, and horseback rides along ancient trails, there are numerous world-famous resorts at which to stay and play. If you’re longing for physical proof of the myths of the Old West, you’ll find it in many of the city’s museums and historic buildings. If you want to experience the Sonoran Desert, one of the continent’s most exotic natural landscapes, you’ll find it within a short drive of your hotel. This Old Pueblo is bustling with life, the Southwestern life—one lived just a bit off center, a bit slower, with a mild sunburn and a big happy smile.

Where to Go in Tucson

The downtown area is where Tucson began and where its heart still beats today—although downtown usually becomes a bit deserted after 5 p.m. on Friday. History is everywhere here, and it’s the only truly pedestrian-friendly section of the city.

The University District has 4th Avenue—the city’s bohemian-chic enclave—sometimes called a smaller version of Telegraph Avenue in Berkeley, California. It’s busy here most hours of the day with a mix of University of Arizona students and hipsters.

Tucson’s midtown neighborhood is where most of the Old Pueblo’s real-life living takes place. The Fort Lowell Museum in the northern part of this district preserves the artifacts of the military’s role in Tucson, and the Tucson Botanical Gardens are the best place to learn about the unique local flora that thrives on aridity. The small but prestigious Reid Park Zoo is a must for families.

The foothills area features artist Ted DeGrazia’s romantic DeGrazia Gallery in the Sun and renowned architect Josias Joesler’s imprint on Tucson. And at Sabino Canyon Recreation Area, the desert meets the mountains and a cool-water creek rushes down from the peaks to create one of the state’s most beautiful and popular desert riparian areas.

West Side and the Tucson Mountains

East Side and the Rincon Valley

The top draw here is Saguaro National Park East, the park’s largest and oldest section. You can walk, bike, or drive through a thick saguaro forest, one of the best and most accessible portions of the Sonoran Desert and the very best place to learn about and witness the desert’s fauna and flora. Head east from the park to tour Colossal Cave Mountain Park, where Old West outlaws used to hide out.

The South Side holds one of Tucson’s top sights, San Xavier del Bac (the “white dove of the desert”), one of the nation’s finest remaining examples of mission architecture. Lovers of Mexican food in all its varieties will want to return to the small incorporated city of South Tucson again and again, for it is here that you’ll find the region’s best enchiladas, tamales, and carne asada.

Greater Tucson includes the forested heights of the Santa Catalina range, whose highest peak, Mount Lemmon, reaches above 9,000 feet and holds the nation’s southernmost ski run. The mountains feature such a different ecosystem that the trip along the twisting Sky Island Scenic Byway is like driving from Mexico to Canada in about an hour. To the south is the lush Santa Cruz Valley, where you can learn all about the nuclear missiles that once ringed the city.

When to Go to Tucson

The Tucson calendar can be divided into just three seasons: spring, summer, and second spring. In January, the average high is about 64°F. February is the Old Pueblo’s so-called “golden month,” with an average daily high of 70°F. At least three major events—the Gem, Mineral, and Fossil Showcase, the Fiesta de los Vaqueros, and the Accenture Match Play golf tournament—have the hotels booked solid during this time. Unless you’re coming to town for one of these popular events, I’d recommend staying away from town in February, despite the near-perfect weather.

In March, the average high is about 73°F, and in April, Tucson and Southern Arizona is a paradise, with an average daily high of 81°F.

The high season, during which prices are highest and tourists are everywhere, runs from February to the end of April. This is the first spring, and it is the most popular time of the year. You need to plan ahead and get a reservation if you’re coming to town during this time. The spring months also feature the multicolored bloom of all the desert’s cacti, trees, and wildflowers.

It’s very hot in the desert in the summer (often over 105°F), but it’s perfect in the mountains, and in July and August Tusconans can usually count on near-daily late-afternoon thunderstorms. 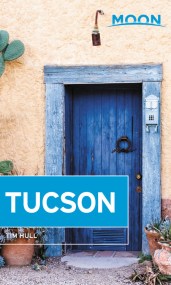 This item is a preorder. Your payment method will be charged immediately, and the product is expected to ship on or around May 29, 2018. This date is subject to change due to shipping delays beyond our control.