The Cherry Creek Bike Path and Platte River Greenway are the main activity paths within the city, but each extends beyond the county lines with offshoots to many other popular paths for bicycling, running, and other sports.

For more about where and when to bicycle around the Denver metro area, go straight to the local experts who have conveniently established websites with loads of helpful information.

On bikepaths.com, there is a great top 10 list of less-traveled trails, a calories-burned calculator, and a list of regional cycling events. There are links and a list of nearly every bike shop in the metro area, too.

For more general information about advocacy for bicycling in Denver, ordinances, and maps, try the City and County of Denver’s Bike Program or Bike Denver. Both of these websites portray bicycling not as just a sport but a movement—and a way of life. Bicycle Colorado offers free online cycling maps and also sells hard copies.

The Cherry Creek Bike Path is one of the most popular off-street recreation paths in the city. There is a concrete path along either side of Cherry Creek, with one side designated for wheels and the other for pedestrians. Starting at Confluence Park, the creek and paths run below the street level of busy Speer Boulevard all the way to the Cherry Creek shopping district, where Speer Boulevard intersects with University Boulevard. There are ramps at intervals on the paths to climb up to street level and see the nearby sights. Down below the streets, it’s a world away from traffic and urban life, with greenery and the sounds of the water to listen to instead. It’s 4.4 miles from Cherry Creek to University Boulevard, but the trail continues on to the Cherry Creek Reservoir (another nine miles from University Blvd.).

The High Line Canal is flanked by a crushed gravel path along most of its length through a handful of counties, parks, residential neighborhoods, and commercial districts. An 8.1-mile leg of the trail starts at Big Dry Creek Trail and winds through neighborhoods and open space with a few chances to glimpse the mountain range and peaks up ahead. After intersecting with the Columbine Memorial Trail, you can detour onto a new trail or continue on the High Line Canal Trail into Douglas County.

The bike paths along the South Platte River are truly appealing, with lots of cottonwood trees and other greenery along the way. Leaving from Confluence Park in either direction, there are some stretches through industrial sites that are less attractive. Heading south from the park, the concrete path goes out to the nearby suburbs and affords views of the Front Range at different intervals. To go all the way to Bear Creek Trail is an easy ride of 8.6 miles.

Bikes need regular maintenance just like automobiles. Schedule a tune-up at the Bicycle Doctor and get the wheels aligned and the tires checked, along with other advice on fixing up your bike. The shop also sells lots of cycling gear and rents quality bicycles. Unlike the city’s popular bike rental program, here there is a large selection of bikes to rent with a friendly staffer to offer advice and tips on where to go and the best routes for bikes.

Rent a bike to ride around Denver at your convenience. Denver Bcycle provides red bicycles from dozens of docking stations around the city. There is a fee to check out the bikes and, like a taxicab, there are rates being added on as long as you keep the bike checked out after the first 30 minutes. This was the first, largescale, municipal bike-sharing system in the United States, and it has now spread to many other cities. Fun features of each bike include a front basket and the hidden computer system that can track the distance ridden, the calories burned, and the carbon offset from riding instead of driving.

Cycling can be a solo or group sport. For those who like to mingle, there is the Denver Bicycle Touring Club, which offers a large variety of weekday and weekend rides throughout the metro area. The idea is to bike at least 15 miles along bike paths and neighborhood streets, either with the intention to socialize and share a meal at the end of the ride or to just get fit. The club also offers extended tours beyond the city and state. There is an annual membership fee to join, but it’s free to tag along once and see what it’s all about first. 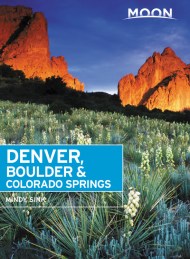