Whether you’re an experienced scuba enthusiast or a novice snorkeler, there’s plenty to see and admire at all levels and depths along Belize’s great barrier reef.

Three of Belize’s top dive sites are along the northern atolls of Lighthouse Reef and Turneffe. If you’re staying on Ambergris Caye or Caye Caulker, visiting these would mean a full-day trip, generally leaving around 7am and returning by 4pm. If all you want to do is dive, avoid the distance and overnight at a resort on Turneffe Atoll.

Almost as popular as the Blue Hole, The Elbow on Turneffe Atoll is a steep drop-off going down to at least 100 feet, where you’ll see large gorgonians and sponges, schools of snappers, jacks, goliath groupers, and Belize’s unique species, the white spotted toadfish. Dolphins and eagle rays have also been spotted here.

Lighthouse Reef Atoll is a favorite for three good reasons. Long Caye Aquarium’s waters are a legendary royal blue, popping against a plethora of colorful fish, including the elusive spotted ray. Nearby, large stingrays, nurse sharks, turtles, and groupers thrive at Half Moon Caye Wall, where the occasional hammerhead shark roams. The infamous Blue Hole is the holy grail of diving, mostly due to its underground limestone formations at 100 feet. But you won’t see much marinelife if you’re diving, other than Caribbean reef sharks in the distance. Snorkelers will find plenty of fish to see, however, along the edges of the sinkhole.

Everyone will find their bliss at Hol Chan Marine Reserve, easily reached from the northern cayes or Belize City, but a less crowded and stunning alternative for snorkeling is Caye Caulker Marine Reserve, with its very own shark ray alley.

More visitors are realizing that the south coast and its offshore cayes offer excellent and uncrowded dive and snorkeling opportunities. The options are limitless, with at least four nearby offshore marine reserves and the easternmost of the atolls, Glover’s Reef. All of these sites are a boat hop away from Dangriga, Hopkins, or Placencia.

If you can only get to one dive site, make the trip to Glover’s Reef Atoll. It’s one of the least-visited cluster of islands, with more than 20 dive sites and an incredible diversity in coral and critters—including reef fish, turtles, sharks, eels, and rays. Visibility is incredible, whether diving or snorkeling, even in poor weather. After the exploration, you can relax with a cocktail on some of the most beautiful powdery white-sand beaches along the atoll, from Long Caye to Southwest Caye.

The Silk Cayes and Laughingbird Caye are excellent picks for novice snorkelers or divers, as well as experienced ones. You’ll spot plenty of coral formations, marinelife that includes lemon sharks, turtles, lobster, eels, and other colorful fish. Right off the Silk Cayes is a shark, ray, and turtle alley not to be missed, where giant loggerhead turtles, manta rays, and lemon sharks congregate in one space.

South Water Caye Marine Reserve’s steep wall dives are spectacular, and often missed by those who stick to the north. The reserve is home to schools of white spotted eagle rays, hawksbill turtles, green moray eels, and the gorgeous queen angelfish. Snorkelers will also be quite happy staying overnight on the island of South Water, one of the few spots in Belize where snorkeling from the beach is an option.

Gladden Spit is not to be missed for yearly whale shark dives, from March through June. 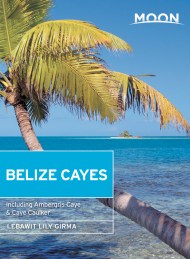