Many of Yosemite’s place names were given by the men of the Mariposa Battalion, who entered Yosemite Valley in 1851 to round up the Ahwahneechee Indians and deport them to a reservation. Dr. Lafayette Bunnell, who traveled with the Battalion, questioned the captured Ahwahneechees about their names for the Valley’s natural features. Some of their words he found too difficult to pronounce, so he substituted a Spanish or English word with roughly the same meaning. Other names were invented in a more random fashion.

The name Yosemite itself is from the Indian word “uzumate,” which meant grizzly bear. The Indian tribe that lived in the Valley were called Yosemites by Caucasians and by other Indian tribes because they lived in a place where grizzly bears were common and they were reportedly skilled at killing the bears. The Mariposa Battalion named the Valley after the “Yosemite Indians” whom, ironically, they’d been sent there to evict. In a further twist, the Indians didn’t call themselves Yosemites; they called themselves Ahwahneechees, and they called the Valley “Ahwahnee” or “place of a gaping mouth.”

Here are the sources of a few of Yosemite’s place names: 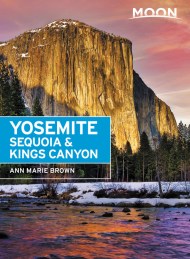