Some of the freshest, most flavorful, and most varied dishes in Southeast Asia belong to Vietnam. From Hanoi’s bun cha (grilled pork in fish sauce with noodles) to Hue’s bun bo (spicy beef noodle soup) or the dozens of southern meals unique to each small village and town, Vietnamese cuisine’s complex and irresistible flavors win over many a hungry traveler. Most meals consist of a rice or noodle base, a few fresh greens, and either meat or tofu. Portions tend to be smaller here than in Western countries. With the cost of meals so low, there’s usually room for seconds in the budget.

You can’t make it to the end of any city block in Vietnam without encountering a street food vendor. Meals are everywhere: in the park; on the sidewalk; outside of government buildings and public meeting areas. Men and women push metal carts down the road or hustle along with a bamboo pole slung over one shoulder. At first glance, the setup appears to be nothing special, but take a closer look and you’ll be amazed by what someone can do with a portable stove and a pair of chopsticks.

While you can buy anything from hot bowls of soup to quick sandwiches or smaller snacks for the road, there are a handful of dishes more commonly found on the street than in a restaurant. Sticky rice (xoi), for example, is a popular street-side snack; the rice is often cooked in different leaves or with certain ingredients that turn the rice green, purple, orange, or black. This snack can be served sweet with sugar, coconut, and mung bean, or savory, often accompanied by chicken. A handful of other sweets, including a hot tofu dessert with ginger and tapioca or fried rice cakes with mung bean, are also found on street carts or in a basket on someone’s head.

There is something to be said for cooking your food out in the open: Street food kitchens, while simple, are almost always more transparent. You’re able to tell which vendors are clean and which are not.

While dishes like pho, Vietnam’s national soup, and banh mi (Vietnamese sandwiches) come standard almost everywhere, local fare is divided into three main regions: the north, central, and south. Shaped in large part by its weather and surroundings, each region’s cuisine relies upon both rice and fish sauce as main staples but also has its own distinguishing characteristics. Furthermore, nearly every hamlet and every village across the country has its own unique recipes.

Northern fare is more meat-heavy, shying away from seafood in favor of chicken and beef, though fish sometimes makes an appearance. Hot dishes like chao (rice porridge) and what is officially considered the country’s best pho are native to the north, as is bun cha, a simple but mouthwatering combination of cold rice noodles, fish sauce, pickled vegetables, and grilled meat.

By the time you reach Saigon and the rest of the south, foods are sweeter, with more sugar found in local dishes. Whether it be the massive river fish of the Delta or the tasty grilled octopus of the southern coast, seafood features heavily in southern cuisine and many dishes are fried, including all varieties of banh xeo (savory pancakes), as well as a handful of local specialties like banh khot (Vung Tau’s delicious, bite-sized rice cakes).

Along with local favorites like southern Saigon Red or Huda, a brew from the central region, freshly made beers are a popular fixture during local happy hours. Bia tuoi (fresh beer) is a locally produced lager sold in 100-liter barrels to small shops across town (also called bia hoi), particularly in Hanoi. Often going for as little as VND4,000 a glass on the street, this watered-down beverage is incredibly popular up north and must be drunk the day it is made, as its shelf life is very short. Men regularly gather at bia hoi after close of business to enjoy a few drinks and catch up. While fresh beer would not under most circumstances be considered a fine beer, the cultural experience of hanging out at a bia hoi in the city is well worth the dirt-cheap price tag.

Much stronger than fresh beer, rice wine is a high-octane spirit that is often enjoyed in the countryside and becomes a major fixture during Tet, the Vietnamese lunar new year. Across Vietnam, locals make their own alcohol, storing it in massive plastic jugs for the coming festivities. Glutinous rice is steamed and left to sit for several days, adding yeast to the mixture, to produce a spirit that can carry a concentration of up to 22 percent alcohol. While you won’t often find rice wine in local shops, it is everywhere in the countryside. In many cases, making local friends off the beaten path is likely to earn you at least a shot or two. 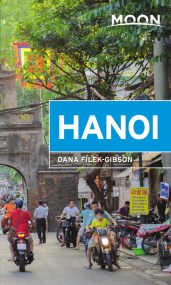 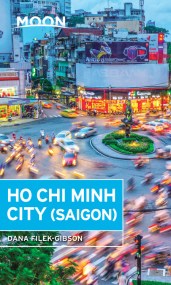 With its mix of modern architecture, deep history, and dynamic culture, Ho Chi Minh City is the future of Vietnam.