North Carolina’s known as the “Cradle of ‘Cue,” but in the summer, it gets a little too hot to prepare proper barbecue. Here on the coast, we tend to turn our attention—and our appetites—eastward, to the sea.

It’s not all seafood and cookouts, though. We pay plenty of attention to our backyard gardens and farmers markets, to thirst quenchers both hard and soft, and, of course, to setting a table that’s more feast than meal.

Oysters aren’t a summer food in North Carolina, but the weather turns warm early and stays seasonable late, creeping into oyster season. That’s why in the spring and fall, when the weather’s summerlike, you’ll find oysters served any number of ways: fried, steamed, baked, or on the half shell. During oyster season, our fishmongers (or “seafood butchers”) will sell them by the peck and the bushel, and every restaurant on the water will feature them on the menu. Me? I like them on the half shell with a little mignonette (red wine vinegar, shallot, parsley, salt, and pepper), but they’re just as tasty fried or roasted.

Shrimp are a year-round affair here on the coast, and we eat them any way we can. You’ll find peel-and-eat shrimp on many menus and they’re just what they sound like: steamed shrimp coated in a secret house seasoning that’s suspiciously like Old Bay at the best places. Peel ‘em yourself, then gobble ‘em down. It’s messy work, but the reward’s worth it. Sometimes we make it at home, steaming a whole pot of them and dumping them out on a newspaper-covered table, feast style. Other times, we turn to trusted restaurants (like Yacht Basin Provision Company in Southport) and fish shacks for the perfect plate.

Folks also like to make use of that family barbecue sauce recipe for their shrimp. They’ll grill, boil, or steam some shrimp, let them cool, then douse them with the same sauce they reserve for pork barbecue—vinegar, black pepper, and red pepper flakes—for an interesting twist on two local flavors.

The tiny town of Calabash is home to the namesake Calabash Seafood, a quick-fried delight that involves shrimp, clams, oysters, flounder, crab cakes, and hush puppies. You can make something similar at home with some practice. Visit the fishmonger and pick up some fresh flounder and shrimp, soak them in Eagle brand condensed milk, dredge them in cornmeal then flour, and season them. Throw them in a hot fryer until they’re golden brown, then serve them up with some slaw and hushpuppies. I already let part of the secret out for the Calabash breading, and if I tell you their hushpuppy recipe, I won’t be allowed back in town, so you’ll have to figure that one out on your own.

Don’t think you’re up to the task of making your own? Want to taste the real deal to adjust your recipe? There are plenty of Calabash seafood restaurants in this tiny seaside town. 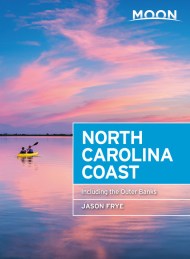 Stunning stretches of sand, salty air, and the promise of adventure: answer the call of the ocean with Moon Travel Guides.