To celebrate Mother’s Day, author Louisa Morgan talks about the strong women in her life who inspired the fiercely powerful mothers and daughters in her novel, A Secret History of Witches. 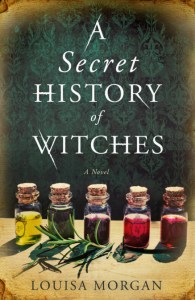 My mother, June, was an orphan. She grew up during the Depression, served in the WACS during WWII, and worked while her husband went to medical school, rather than go to college herself. When he left her with five children to raise, she somehow managed to accomplish that and become a master teacher in remedial reading. She never intended to raise her family alone or to be a single working woman for most of her life, but she did what was necessary, and did it with grace and pride. I asked her once how she found the strength, and her answer was, “I just put one foot in front of the other, every day. One foot in front of the other.”

My paternal grandmother, Elizabeth, was a very different woman. Born near the turn of the twentieth century, and married early, she rebelled against the norms of her time, leaving her husband in order to pursue a career as a painter. She carved her own path, building a career as an artist and teacher, disdaining convention and tradition, caring nothing about her reputation or the way society regarded her.

They were both powerful women, June and Elizabeth, and I admire them deeply for their strength. Theirs was the kind of power that comes from hard work, commitment, courage, and sacrifice. Their power was not the kind that rules nations or commands armies, but which leaves an indelible mark on the world just the same—in the lives they touch, the children they raise, the grandchildren they teach. These two, my ancestresses, are the inspiration for the working magic wielded by the Orchiére witches.

In A Secret History of Witches, the craft is ancient, forbidden, and all but forgotten, and the women who wield it have a power that is distinctly feminine. There are no broomsticks, no wands, no bubbling cauldrons. The craft they practice is more perilous than any of those things, and requires more of them than that sort of easy magic would. Their craft represents knowledge, and power, and the thing some people fear most in women—independence.

Secret History is, of course, a historical novel, but even today there are elements of society which allow men, or government, to decide women’s lives for them. Some of these decisions are superficial, as in dictating what women can wear, but some, like coerced marriages, are more profound and have far-reaching consequences. These are the circumstances the Orchiére witches struggled against, with their magic as a tool. I think of their magic as a focal point, a concentration, of their innate and singular power as women.

My grandmother and my mother passed down their strength and wisdom to me and my sisters. We don’t call it magic, but we could. I think of it in the same way I think of the Orchiéres’s craft, passed down to their descendants along with its traditions and knowledge. It’s not easy to practice the craft, and it’s never simple, but for better or worse, it empowers women to live as they choose.

Give the gift of witches this Mother’s Day with A Secret History of Witches, now available in paperback! Buy now!