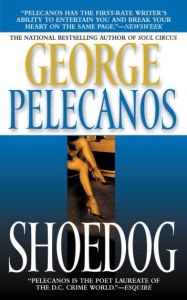 I have said many times that I have been blessed with a dream career as a novelist. Though I share with many other writers an early history of low advances, lack of promotional support, few reviews, and repeated non-appearances on the bestseller lists, I never got stressed over it. Instead, I saw all of these supposed hurdles as an opportunity to work on my craft and try different things without intervention. Luckily, I had an editor at the time who believed in what I was doing and a publisher who barely knew that I existed. It was kid-in-the-candy-store time for someone who just wanted to write books.

Shoedog was my third novel, a break in the Nick Stefanos trilogy. The switch from first person to third was liberating. My intention was to write a pulp/noir in the tradition of David Goodis with the sensibilities of early 70’s film. Or, to put it another way, it would be the literary equivalent of the film version of The Getaway, had Peckinpah shot Jim Thompson’s mindblowing ending as written.

The novel by design would be relatively short, meant to be read perhaps in one long afternoon, with the reader seated on the subway or on a park bench or in a bar, or simply adrift in the city, lost in the book. It would be a stand-alone, unencumbered by the artificiality of series fiction, so anything could happen. In my mind I saw the construction of the book as a pyramid. The base, the second chapter that describes the worldwide journey of Constantine, was deliberately long. Subsequent chapters would get shorter and punchier as we return to Constantine in the present. The style becomes rhythmic, leaner and more muscular as the story hurtles toward its climax. The last sentence of the novel “cuts to black.” Much like the amped-up cars the book lovingly describes, Shoedog is the vehicle for a straight-ahead thriller that means to shock and entertain.

The premise was simple: a drifter returns to Washington, D.C. after a seventeen year absence, becomes a driver in a dual liquor store heist, and finds the dark center of what he has been unwittingly moving towards his whole life. Its amoral protagonist, typical of the noir anti-hero, is doomed from the start. With the end certain, as certain as it is for us all, the only thing that matters is the ride.

The book came as quickly as anything I’ve written. I remember the night I wrote the chapter where Constantine walks into Mean Feats and meets Randolph, the shoe salesman extraordinaire who is the title character of the book. At the time I was living in an unairconditioned bungalow with Emily and our then one-year old son. I worked in the attic, which on that July evening was over one hundred degrees. Typing in boxer shorts and a wife-beater, I wrote the entire chapter of thirteen pages in an hour span, the words running behind my eyes faster than I could type them. The prose was clean and went directly to publication as written. It was one of those magic, manic moments that many writers describe. The faucet was full-on.

Shoedog incorporated several of my obsessions that would show up in subsequent books. Shoes (and the legs and feet that came with them); American musclecars; the funk and soul movement of the 1970s; the ritual of drinking and bars; the idea of the workplace as the second home of outcasts, loners, and freaks; work itself as its own reward; and the notion of friendship, honor, betrayal and bloody redemption. I have owned many fast cars and admired the triple holy grail of car chase films, Bullitt, The French Connection, and the relatively unheralded The Seven-Ups, all produced by Phillip D’Antoni. I always wanted to write a book where the drivers pick out their vehicles. There is a chapter in which they do just that. And a chapter, of course, where Constantine pins the pedal to the floor, takes his Hurst shifter in hand, and shows us just what kind of driver he can be. The final pages, where Constantine wages a one-man assault on the house of the men who have betrayed him, is as violent and visceral as anything I have written. A reviewer of the book stated that the ending “left him reeling.” If that’s true, then I did my job.

As was the case for all of my books in the early to mid-90s, the audience for Shoedog was small. It is not an “important” book, but it is one that I am proud of, because it accomplishes precisely what it sets out to do. Shoedog went quickly out of print and eventually found life overseas, published in France by Gallimard’s Serie Noire. But up until now it has never been released in mass market paperback. For many years it has been the lost book in my canon, fetching ridiculously high sums by dealers and collectors. Now it’s available, affordably, in the format and size in which I had always hoped it would be published. Enjoy the ride.