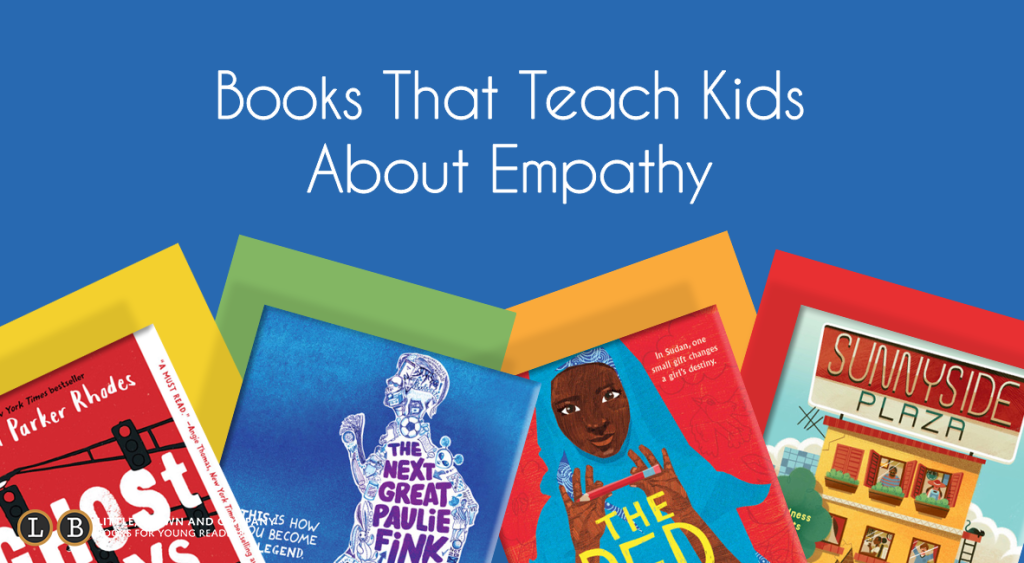 Empathy is perhaps the most important thing children can learn from books, other media as well, but especially books. The ability to put yourself in someone else’s position, see how they think, and feel what they feel is a necessary part of moving through the world with kindness, awareness, and grace. Books are uniquely suited to helping children learn empathy because of the closeness a reader feels to the character they are reading about. Readers don’t just see what characters do, they bear witness to those characters’ innermost thoughts and emotions. Sharing someone else’s journey that intimately changes the way you see the world and the way you interact with people who are different from you. Here are some books you can share with your kids to teach them empathy!

Sally Miyake can’t read, but she learns lots of things. Like bricks are made of clay and Vitamin D comes from the sun. Sally is happy working in the kitchen at Sunnyside Plaza, the community center she lives in with other adults with developmental disabilities. For Sally and her friends, Sunnyside is the only home they’ve ever known. Everything changes the day a resident unexpectedly dies. After a series of tragic events, detectives Esther Rivas and Lon Bridges begin asking questions. Are the incidents accidents? Or is something more disturbing happening? The suspicious deaths spur the residents into taking the investigation into their own hands. But are people willing to listen?

Twelve-year-old Jerome is shot by a police officer who mistakes his toy gun for a real threat. As a ghost, he observes the devastation that’s been unleashed on his family and community in the wake of what they see as an unjust and brutal killing. Soon Jerome meets another ghost: Emmett Till, a boy from a very different time but similar circumstances. Emmett helps Jerome process what has happened, on a journey towards recognizing how historical racism may have led to the events that ended his life. Jerome also meets Sarah, the daughter of the police officer, who grapples with her father’s actions. Once again Jewell Parker Rhodes deftly weaves historical and socio-political layers into a gripping and poignant story about how children and families face the complexities of today’s world, and how one boy grows to understand American blackness in the aftermath of his own death.

The Next Great Paulie Fink

When Caitlyn Breen begins her disorienting new life at Mitchell School–where the students take care of real live goats and study long-dead philosophers, and where there are only ten other students in the entire seventh grade–it seems like nobody can stop talking about some kid named Paulie Fink. Depending on whom you ask, Paulie was either a hilarious class clown, a relentless troublemaker, a hapless klutz, or an evil genius. One thing’s for sure, though: The kid was totally legendary. Now he’s disappeared, and Caitlyn finds herself leading a reality-show-style competition to find the school’s next great Paulie Fink. With each challenge, Caitlyn struggles to understand a person she never met…but it’s what she discovers about herself that most surprises her.

Finally, Amira is twelve. Old enough to wear a toob, old enough for new responsibilities. And maybe old enough to go to school in Nyala — Amira’s one true dream. But life in her peaceful Sudanese village is shattered when the Janjaweed arrive. The terrifying attackers ravage the town and unleash unspeakable horrors. After she loses nearly everything, Amira needs to dig deep within herself to find the strength to make the long journey — on foot — to safety at a refugee camp. Her days are tough at the camp, until the gift of a simple red pencil opens her mind — and all kinds of possibilities.

When people look at George, they think they see a boy. But she knows she’s not a boy. She knows she’s a girl. George thinks she’ll have to keep this a secret forever. Then her teacher announces that their class play is going to be Charlotte’s Web. George really, really, REALLY wants to play Charlotte. But the teacher says she can’t even try out for the part . . . because she’s a boy. With the help of her best friend, Kelly, George comes up with a plan. Not just so she can be Charlotte — but so everyone can know who she is, once and for all.

Mia Tang has a lot of secrets. Number 1: She lives in a motel, not a big house. Every day, while her immigrant parents clean the rooms, ten-year-old Mia manages the front desk of the Calivista Motel and tends to its guests. Number 2: Her parents hide immigrants. And if the mean motel owner, Mr. Yao, finds out they’ve been letting them stay in the empty rooms for free, the Tangs will be doomed. Number 3: She wants to be a writer. But how can she when her mom thinks she should stick to math because English is not her first language? It will take all of Mia’s courage, kindness, and hard work to get through this year. Will she be able to hold on to her job, help the immigrants and guests, escape Mr. Yao, and go for her dreams?