Groceries are crazy expensive: The average family can easily spend $150 and up a week on them–and you likely spend way more if, a) you buy plenty of healthy goodies and organic food, or b) you get Whole Foods-ed (that’s what happens when you buy a tiny handful of things and it somehow ends up costing you upwards of $50. Yikes!  Whole Foods = whole paycheck!). So cutting spending at the grocery store could be one of the most important ways to save money for your family.

Some people spend a lot of time hunting for coupons to save money at the grocery store. And if you have the time to do that great, but you don’t need to do that to rack up real savings at the supermarket. Here are some of the supermarket rules you can follow so you’ll automatically save at the grocery store — without having to really think about it.

Fish are often laid out over ice at the fish counter, which makes them look fresh-caught. But often they were previously frozen to keep them fresh while they were on the boat and then thawed at the store. Buy that same fish in the frozen aisle, and you can save as much as 40 percent. If the grocery store is behaving on the up and up, on the “fresh” fish you will see (typically in teeny print on the sign labeling the fish) a note that says “fresh frozen” or something like that, but not all stores label their fresh fish like that. To make frozen fish taste fresher, thaw the fish in a bowl of milk (this helps remove that frostbitten taste).

Fruits and vegetables, like the apples, berries, onions, and other items lining the produce section of your grocery store seem bright and fresh, but they’re often not. One study found that the average apple in the grocery store was 14 months old (um, gross!). How can that be? Fruits are often picked and then immediately put into cold storage for months until stores need them; once they do, they are brought out and put on the produce shelf to masquerade as fresh-picked produce – which is then marked up accordingly. Even organic markets do this; it’s not just the big chain grocery stores. To avoid this, buy what’s local and in season at the time because those items are far less likely to have met the cold-storage fate. If you want an item that isn’t in season or local, consider buying it frozen and saving a bunch by doing so, without sacrificing flavor.

It may not be a surprise that it’s almost always cheaper to buy a large hunk of meat–be it a flank steak or a chuck roast–than it is to buy the item pre-cut. But here’s what many people don’t know and don’t do: buy that large hunk of meat and then ask the butcher to cut it, grind it, or de-bone it for you. The people working behind the meat counter are almost always willing to do this for you, you’re getting the same meat as if you’d bought it pre-cut, and it can save you 30 percent or more.

Don’t expect to pay the same price for certain items, especially things like nuts and cheese–even if you buy them at the same time from the same store. For example, buying cheese in the dairy, deli, or cheese specialty section can result in you paying prices that vary by up to 50 percent, with the specialty cheese department likely the priciest of all followed by the deli department. The reason: different departments in the store have different overhead costs. The deli and specialty cheese departments have more staff to pay typically, so they price identical items differently.

Grocery stores are super sneaky in their design, as many are set up so that you enter towards the right and then go counterclockwise around the store buying items. The reason: most of us are right-handed and we grab more with our right hand than left hand, so this design lures us into spending more. Buck that trend by shopping the opposite way (in other words, go left).

The less often you grocery shop, the less you spend, studies show. The average household makes 1.6 trips a week, so cut down your trips to the store. You can make a once-a-week trip count even more by doing it on a Tuesday or Wednesday. While the most popular day to shop, not surprisingly, is Saturday, you’ll likely get a better selection and can best take advantage of sales if you shop on a Tuesday or Wednesday. Don’t worry, you can just show up — and of course already be a member of the store’s loyalty program — and take advantage of the sales then; no pre-hunting for coupons required! The reason: Many stores (though this does vary from store to store; ask a sales clerk if you aren’t sure at your store) start their weekly discounts and promotions on one of these two days, so shopping then let’s you take advantage of the items before they run out. To save even more, go without the kids if you can. Studies show that shopping with other people ups your spending. Added bonus: You get an hour free of whining!

For more savings tips from Catey Hill, a financial journalist and author, check out her book: The 30-Minute Money Plan for Moms: How to Maximize Your Family Budget in Minimal Time. 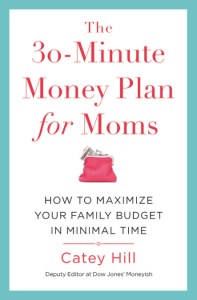