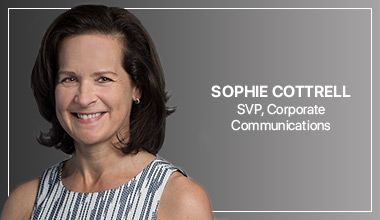 Sophie Cottrell is Senior Vice President, Corporate Communications for Hachette Book Group and is a member of the Executive Management Board. She oversees media relations, internal communications, Hachette Speakers Bureau, HBG’s philanthropic activities and environmental program, and works closely with Hachette Livre and Hachette UK on communication and branding opportunities. Sophie is a member of the Association of American Publishers’ Sustainability Working Group.

Sophie originally joined Hachette Book Group (then Time Warner Book Group) in 2002 as Associate Publisher for Little, Brown and Company, and held that role until 2008, when she became HBG’s VP of Communications. She started her Publishing career at Alfred Knopf in 1989 where she held a variety of publicity roles including Associate Publicity Director, and served as Publicity Director at Pantheon Books from 1999 to 2002.

Sophie graduated from Brown University with a degree in Comparative Literature with French. She is married with three children and lives in Pelham, NY.