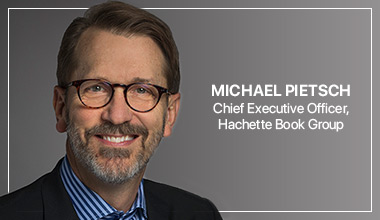 Earlier in his 40-year publishing career, as Publisher at Little, Brown and in editorial positions at Crown and Scribner, Pietsch published books by acclaimed writers including Michael Connelly, Malcolm Gladwell, Peter Guralnick, Stephenie Meyer, Walter Mosley, James Patterson, Keith Richards, J.K. Rowling, Stacy Schiff, David Sedaris, Donna Tartt, David Foster Wallace, and Malala Yousafzai. He continues to edit select books, and his passion for the close partnership between writers and publishers is the foundation of his approach as CEO.

Michael serves on the boards of PEN America and Poets & Writers, and is currently serving as Chairman of the Association of American Publishers. He attended Booker T. Washington High School in Norfolk, Virginia, and Harvard College. He and his wife, Janet Vultee Pietsch, a children’s book editor, have three children and live north of NYC.