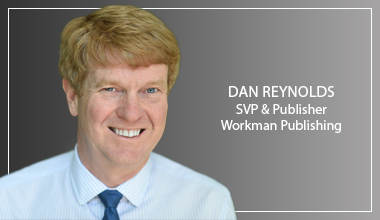 A publishing executive for more than 25 years, Dan started his career in 1995 at Storey Publishing, first as Chief Financial Officer and later as Publisher, President, and eventually Chief Executive Officer. During his time there, Dan greatly sharpened Storey’s mission as a leading publisher of practical information that encourages personal independence and harmony with the environment. He also broadened Storey’s reach by launching its children’s publishing program. In 2000, he was instrumental in brokering Workman’s acquisition of Storey. Later, he worked directly with Peter Workman to complete the deals that led to Workman’s acquisition of Timber Press (2006) and HighBridge Audio (2007).

In 2014, Dan joined Workman as CEO, where he stabilized the company and reenvisioned its structure following the death of Peter Workman in 2013. Dan created a management model that strengthened the independent identity of each of the company’s imprints. He also worked to shine a brighter light on Workman’s iconic brands, including Brain Quest and the Big Fat Notebooks, and he oversaw the launches of the bestselling Atlas Obscura and Paint by Sticker brands. Significant growth ensued over the coming years. In 2021, he spearheaded the Workman side of its sale to Hachette Book Group.

Dan and his wife, who is a weaver, have two grown children and split their time between New York City and Western Massachusetts. In the city, he can usually be found running along the Hudson River early in the morning. In Massachusetts, Dan loves to garden and dreams often of his next crop of Sungold tomatoes.