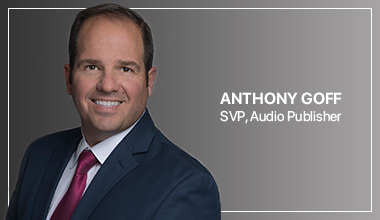 Anthony Goff (Senior Vice President, Content Development and Audio Publisher) started his career in 1993 at Dow Jones, Inc. working for The Wall Street Journal and Barrons. In 1995 he made his foray into book publishing in marketing at St. Martin’s Press, before jumping into sales at Penguin USA during the Stephen King Green Mile phenomenon, and later managing Advertising and Promotions for Dutton/Plume. In 1997, Anthony was hired by Simon & Schuster where he stayed in sales/marketing and publishing positions for seven years. In 2003 he moved to Time Warner AudioBooks as Marketing Director, before being promoted, first to Associate Publisher, then VP & Publisher of Hachette Audio. Under his direction, the audio team has grown steadily and been a significant profit contributor to the book group as Anthony forged new sales relationships focusing on developing technologies and emerging platforms. Furthermore, with Anthony overseeing the Audio marketing and production departments, Hachette Audio have won six Grammy awards and three Audiobook of the Year distinctions. Anthony has been on the Audio Publishers Association Board of Directors since 2004, serving both as President, and Vice President. A graduate of Fairfield University, along with his wife Jennifer, they have three children and reside in Cranford, NJ.