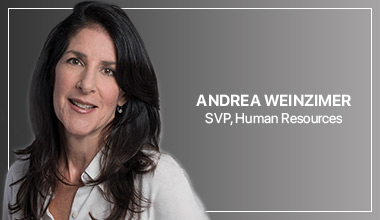 Andrea Weinzimer is the Senior Vice President of Human Resources for Hachette Book Group, Inc., and serves as a member of the Executive Management Board.

Andrea originally joined the Company in 2001 when it was a part of Time Warner. In 2006, when the Company was purchased by Hachette Livre, she helped manage the transition to new ownership. During her tenure with the Book Group, it has been named a Best Company to Work for by Crain’s New York Business for three consecutive years (2009 – 2011).

Andrea is a member of the HR Executive Committee of the American Association of Publishers (AAP), and is the Chair of the AAP Compensation Committee. She is an active member of the Women’s Media Group and the Society for Human Resources Management (SHRM). She received an award from the 5 O’Clock Club for her outstanding compassion and decency to employees.

Prior to joining the Hachette Book Group, Andrea’s previous work experience includes positions within the Investment Industry, Advertising and a Legal Information Services firm. She has worked as an independent consultant providing HR services to a diverse group of clients.

Andrea’s other interests include volunteer work with the SMART Ride (an AIDS fundraising organization that gives 100% of pledges raised back to the communities to be used for direct services.), and in the New York City school system.