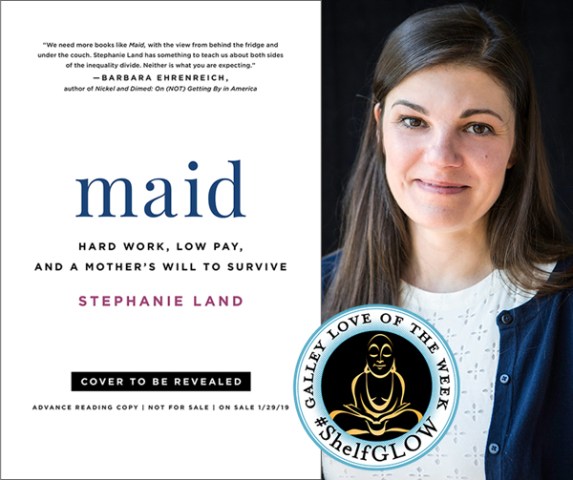 Be among the first to read MAID, a Shelf Awareness Galley Love of the Week. GLOW selects titles that have not yet been discovered by booksellers and librarians, identifying titles that will be important hand-selling titles in a future season. Request your copy now, while supplies last!

“We need more books like Maid, with the view from behind the fridge and under the couch. Stephanie Land has something to teach us about both sides of the inequality divide. Neither is what you are expecting.”

– Barbara Ehrenreich, author of Nickel and Dimed: On (NOT) Getting By In America

As a single mother, Stephanie Land scrubbed the toilets of the wealthy and lived in a dank studio with her young daughter.  Her Journey is one of resilience and grit as she hops from home to home and survives on $9.00 an hour and public assistance.  Maid is an illuminated dive into the gut-wrenching truth of both the secret underbelly of middle-class America, and the reality of what it’s like to be in service to them.

Emotionally raw and heartrendingly beautiful, Maid is an unforgettable story of survival and a mother’s relentless determination to provide a better life for her child. Maid gives voice to the working poor, fueled by Land’s courage to expose the reality of pursuing the American dream from below the poverty line.

Stephanie Land’s work has been featured in the New York Times, the New York Review of Books, the Washington Post, the Guardian, Vox, Salon, and many other outlets. She lives in Missoula, Montana.