On Writing BEFORE THE DEVIL BREAKS YOU

I have always adored ghost stories.

Some of my earliest memories are of watching Hammer horror films and episodes of “Dark Shadows,” reading pulp monster comics, and whispering spooky tales above a flashlight’s glow during sleepovers. The summer I was nine, I spent a week in North Carolina with my great-grandmother, whom I mostly knew only through letters. I was nervous about our visit until I discovered our mutual love of the supernatural. Grandmother Kutz had been raised by her psychic grandmother and undertaker grandfather and was full of Pennsylvania Dutch superstitions: It’s bad luck to place a hat on the bed; A sound heard three times is an ominous warning; A bird hitting the window portends death in three days. During my week with her I was thrilled to hear tales of restless spirits who refused to stay put in their graves.

Being creepy is a family tradition. It was inevitable that I’d want to write my own ghost stories someday. Enter The Diviners.

Before the Devil Breaks You is the third book of The Diviners series, a four book supernatural tale set against the neon blaze of a Jazz Age New York City where ghosts and demons skulk the streets and subways and a malevolent force is spreading across the land—an army of the hungry dead led by the mysterious King of Crows. “It’s The Great Gatsby meets Stephen King,” as my editor, Alvina Ling, i.e., She Who Is Far Cleverer Than I, puts it.

I set out to tell a ghost story, but more specifically, I wanted to write an American ghost story, one informed by the many ideals, conflicts, myths, and contradictions of our national DNA. After all, we are a nation founded on the idea that all people are created equally and imbued with certain inalienable rights; we are also a nation founded on genocide and centuries of slavery. We are a country built by the richness of immigrants arriving with their many traditions, cultures, beliefs, religions, and hopes. And we are a country prone to prejudice, xenophobia, and arguments about identity. Our dreams and sins are fertile ground for restless spirits. Even our ghosts have ambitions.

As a New Yorker, I’ve long been fascinated by Ward’s and Randall’s Islands, two joined fists of land sitting in the middle of the East River and presided over by the poetically named Hell Gate Bridge. (C’mon. It’s called the Hell Gate, people!) Ward’s and Randall’s were, at various points, home to an asylum, an inebriates’ home, a juvenile delinquent center, and a poor house. They were repositories for New York’s unwanted—pushed out of sight and out of mind. Not so coincidentally, the islands were also home to potter’s fields—mass graves of unclaimed dead. I began to wonder about the voices of those long-neglected, forgotten people. What sort of ghosts might they become? Were they angry? Frightened? Would they carry warnings for the living? Would they want revenge? And what of the King of Crows? What plan did he have in store for them?

Before the Devil Breaks You takes readers to a 1920s New York City full of magic and mysticism, speakeasies, gangsters, the Ziegfeld Follies, Harlem Renaissance, rising radio stars, street-tough pickpockets, Tin Pan Alley songwriters, star-crossed lovers, wisecracking newshounds, vicious gossip columnists, and elderly witches. It shows readers a New York City of anarchists, the eugenics movement, secret government projects, and the horrors of war. It takes them to Brooklyn’s Vitagraph movie studio, where many dreams are built, and to Ward’s Island, where some dreams are buried. It’s a story of gifted young people: object readers, dream walkers, mystical healers, clairvoyants, and interpreters for the dead, whose skills will be needed in an epic battle of good and evil in which the stakes are no less than the soul of a nation.

Change happens. Time moves on. Today, the asylums, refuges, and poor houses of Ward’s and Randall’s islands are long gone, replaced by tennis camps, soccer fields, and festival concerts selling overpriced bottles of water. But the forgotten dead still lie in their mass graves below.

And in 2017 America we are still grappling with the unsettled ghosts of our past. 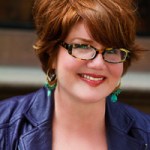 Libba Bray is the New York Times bestselling author of The Gemma Doyle trilogy (A Great and Terrible Beauty, Rebel Angels, The Sweet Far Thing); the Michael L. Printz Award-winning Going Bovine; Beauty Queens, an L.A. Times Book Prize finalist; and The Diviners series. She is originally from Texas but makes her home in Brooklyn, NY, with her husband, son, and two sociopathic cats.  You can find her at LibbaBray.com. 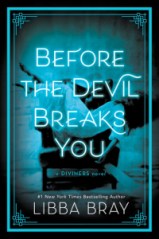 The Diviners are back in the thrilling and eerie third installment by award-winning author Libba Bray.

After battling a supernatural sleeping sickness that nearly claimed two of their own, the Diviners have had enough of lies. They’re more determined than ever to uncover the mystery behind their extraordinary powers, even as they face off against an all-new terror. Out on Ward’s Island, far from the city’s bustle, sits a mental hospital haunted by the lost souls of people long forgotten – ghosts who have unusual and dangerous ties to the man in the stovepipe hat, also known as the King of Crows.